Posts from an Emerging Leader: Reeds in the Wind – Flexibility and Leadership

September 2015 Seminar
This blog is part of a ten-part series capturing my experiences as part of the 2015 Lead NJ Class, which follows the monthly two-day seminars our class participates in over the course of one year. For the next several weeks I’ll be posting a blog every Monday up through my graduation in early December 2015. You can read it here and in occasional posts on the Dodge Blog.

It’s early September and the clouds intermittently scuttle across the sky, stragglers from the rainstorms of the night before. I gaze out across the grasslands and salt marshes of the Edwin B. Forsythe Wildlife Refuge, watching the grasses wave in the breeze that flows across these lands, watching the reeds bend and dance and right themselves again.

We’ve spent the last two days learning about environmental issues in New Jersey, and this is the last stop: The Refuge, a resting place on the largest migratory route for birds in the Americas.  It’s astonishingly beautiful and I absolutely recommend that people take advantage of this 47,000-acre coastal zone that stretches along the Jersey shoreline from Mantaloking to Atlantic City, managed by the U.S. Fish & Wildlife Service.

This particular patch of land sits just outside of Atlantic City, and I can see the high-rise casinos and windmills in the distance, out over the reeds. From an observation tower my classmates and I look through binoculars at egrets, wood ducks, blue and grey herons that look, as the Pulitzer Prize-winning poet Mary Oliver says in Some Herons, like preachers and poets in their white and grey robes. We watch swans charge each other to mark the boundaries of their territories.

But I keep coming back to the reeds.

Nature has always inspired me and in watching the resiliency of the reeds, the way their stems flex and swing without losing their shape I reflect on the lessons of the last 48 hours.

Sometimes, no matter how well you prepare, things just don’t go according to plan. When that happens, you can choose how you will deal with those moments: will you be flexible and make the most of whatever the new circumstances are? When when you feel buffeted by a changing landscape around you, do you lean into the wind or let it propel you along? And how do you handle the tension between everyone’s needs, opinions and desires?

Part of strong leadership is the ability to stay flexible, and to find a way to balance those tensions as best as one can. Sometimes, you end up experiencing or learning something that wasn’t even on your radar.

I had just such an experience during our Environmental seminar this September, during which circumstances changed our plans and brought me a deeper understanding of the subtle dynamics of good governance and good stewardship. 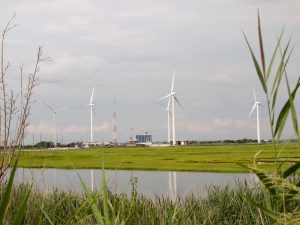 I’d been planning for weeks that I’d jump on the bus to the ACUA waste treatment and wind farm facility – I was intensely curious about how waste is managed in the most densely populated state in our nation, but was quickly ushered into the first limo when it arrived, which I discovered too late was destined for the Wildlife Refuge.  I was disappointed, but there was nothing to be done.

At the education center of the Refuge, we watched a video that gave us background on the formation of the Refuge, the species we could expect to find, the resources that the Refuge protects, and some of the uses of the Refuge – which included hunting for deer.

The latter sparked a debate among our group about the ethics of opening a refuge to hunting, balanced with the need for population control and more discussion around what route is more humane – culling herds of deer or watching populations run out of food and starve. There were, unsurprisingly, differences of opinion and passionate advocates for each point of view.

What struck me in the course of this discussion is how challenging stewardship of places like the Wildlife Refuge, or any embattled area of land, is. Organizations often have to make unpopular decisions based on the available information with vocal, sometimes angry, advocates on all sides lobbying for their needs and desires. And, if we’re honest about human emotions, oftentimes these organizations have to save humans from our own short-term reactions to circumstances. 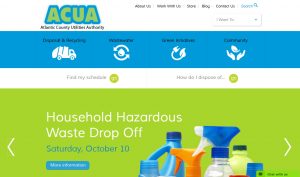 So what do you do if you’re a governing body for that land? How do we balance protecting the wetlands along our coast with the development or the lcoation and treatment of the millions of tons of trash we generate? How do we balance access to fuel and utilities – which many of us take for granted, like the sun rising each day – with keeping our essential aquifers pure and replenished? What changes warrant federal or state legislation changes? What changes need to be driven by government versus citizens?

And who is being represented in the conversations? Do our lower-income residents have enough of a voice and equal access to those with decision-making authority when it comes to the location of waste facilities, fuel lines and wind farms? Even if you’re fighting a losing battle for access or development, do you stay rigid and fight as hard as you can so people will think twice before attempting similar endeavors? Or do you bend just enough to be able to spring back when the wind dies down? How the heck is a simple little reed expected to withstand all of that?

I thought back to the previous day, when we started our seminar at the Pinelands Preservation Alliance’s facility in Southampton, NJ. There we were introduced to the Pinelands Preservation Alliance, which “serve[s] as the public’s watch-dog over government, going to meetings and analyzing the actions and documents that most citizens cannot monitor on their own,” and the Pinelands Commission, an independent state agency whose mission is to “preserve, protect, and enhance the natural and cultural resources of the Pinelands National Reserve, and to encourage compatible economic and other human activities consistent with that purpose.”

Our speakers were Carleton Montgomery, Executive Director of the Alliance and Larry Liggett, Director of Land Use and Technology Programs at the Commission. The thing I will always remember and respect about these two gentlemen is that, although their organizational roles often pit them against each other, they still treat each other with respect and civility, and they listen to one another.

They fought for their points of view but understood the value of compromise and flexibility. They understood that it is essential to separate the person from the decision. As one said with a wry chuckle (and I’m paraphrasing slightly), “We disagree with each other on some of the decisions being made about the use of the Pinelands – to the point of occasionally having to sue each – but it’s important to remember that we’re after the same thing: protecting this unique environment to the best of our abilities, and in alignment with the organizations we represent.” 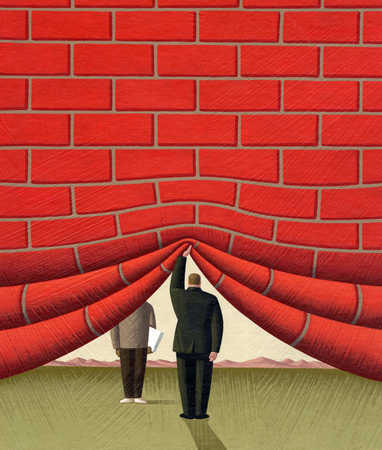 Leaders sometimes have to make unpopular decisions. Leaders also understand that tension – and contention – is not always a bad thing. As Chip and Dan Heath say in their recent book about creative and smart decision-making, Decisive, “The point is not that compromise is a necessary evil. Rather, compromise can be valuable in itself, because it demonstrates that you’ve made use of diverse opinions, which is a way of limiting risk.”

To stay flexible, as a leader, can often mean trying to understand where a person with a contrary viewpoint is coming from, and why they believe what they do; to fight entrenchment of opinions and to make the space for people to be heard; to the best of our ability, explain why we make the decisions we make, but to also acknowledge that there is still disagreement. Each of us is a single reed, but we don’t grow in isolation, we grow together and the wind tosses us all. Flexibility is required in order to be good stewards of our lands…and each other.

Kacy O’Brien is the Program Manager at Creative New Jersey, a statewide initiative dedicated to fostering creativity, innovation, and sustainability by empowering cross-sector partnerships in commerce, education, philanthropy, government, and culture, in order to ensure dynamic communities and a thriving economy.

This blog is part of a ten-part series capturing Kacy’s experiences as part of the 2015 Lead NJ Class, which follows the monthly two-day seminars her class participates in over the course of one year. Topics range from policy to the economy, to education, arts and culture, energy, criminal justice and healthcare, with a focus on New Jersey’s current state and its future. The views and opinions expressed in this blog are those of the author and do not necessarily represent those of Lead NJ, The Geraldine R. Dodge Foundation, Creative New Jersey, their staffs, and/or any/all contributors to this site.  For corrections or questions, please email Kacy at: kobrien@creativenj.org.

Kacy gratefully acknowledges Lead NJ and The Geraldine R. Dodge Foundation for their support of her participation in the 2015 Lead NJ program.