A CSO on the Passaic River in Newark.

The Passaic Valley Sewerage Commission has signaled that it intends to go above and beyond the minimum requirements set in its new state combined sewer overflow (CSO) permit.

PVSC, three weeks after the CSO permit went into effect, issued a request for proposals for a suite of services that, together, will result in a comprehensive Long Term Control Plan that shows significant forward thinking. The commission stated in its RFP that it “envisions (using) green infrastructure as a key element” of its long term plan, which is required to be complete in five years.

Additionally, the authority wants the experts who help design the plan to incorporate a suite of best practicescompiled by the Urban Water Solutions Initiative, a collaborative effort supported by New Jersey Future. Those practices include robust public engagement, water conservation, flooding and climate resiliency measures, regional approaches to solutions and innovative financing.

The Initiative promotes these approaches because they can help lower costs, while allowing cities to incorporate multiple benefits that enhance quality of life and support economic growth into what will be a massive public works investment.

A road map for infrastructure upgrades

On July 1, new state permits went into effect for the 25 municipalities, sewage treatment plants, and sewage authorities that manage systems with CSOs. In addition to the steps these entities already have taken to control overflows, they now must develop comprehensive Long-Term Control Plans. These plans will act as road maps for how communities and utilities will upgrade infrastructure in the coming years and decades.

If communities take on the planning effort individually, they will have three years to develop a complicated engineering model of their system, determine what options may work for specific areas, and formulate their plan. But communities that work together or with sewage authorities will have up to five years to complete this process.

PVSC is the largest authority with a permit, servicing eight CSO municipalities and collecting sewage from nearly 50 communities. 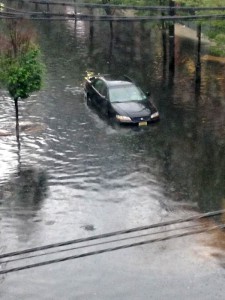 Overflows occur when combined sewer systems – which carry both sewage and stormwater and were considered the highest technology when they were built in the late 1800s and early 1900s – are overwhelmed by the amount of rainwater or snowmelt flowing into the system. The outfalls act as a release to the system, allowing the excess sewage and stormwater mix to flow out and into waterways. Combined systems also can cause street flooding during heavy rainstorms and even can cause sewage to back up in basements.

While the sewer systems were built with these releases in mind, the permitted overflows are a major source of water pollution. The sewage affects the aquatic environment, forces beach and waterway closures, and can affect the health of anyone who comes into contact with the contaminated water.

While many cities and states around the country have been forced by the federal Environmental Protection Agency to stem the flow from their combined sewers, New Jersey and its cities have never been under such order. Rather than wait for enforcement action from the federal government, the state is using permits to spur a long-term planning process, which will result in CSO communities reducing or eliminating overflows.

New Jersey CSO communities have already taken substantial steps toward reducing or ending overflows. Nearly 65 overflows already have been permanently closed off, according to the Dept. of Environmental Protection. Other communities have spent millions of dollars to install grates and shields on overflow pipes and sewer openings to keep trash out of the system. 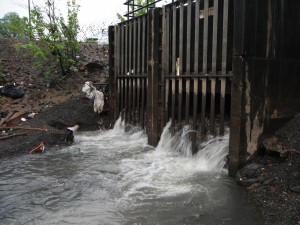 This “solids and floatables” control is an example of system optimization – allowing the existing system to work better because trash and other foreign objects no longer take up space that could be filled with water. This also has reduced the amount of trash getting dumped into waterways via CSO outfalls, thus reducing the amount of trash that washes up along shorelines.

Why this matters for cities

Developing and implementing a Long Term Control Plan is a huge job for communities, and meeting the deadlines is a source of stress for local officials.

In Perth Amboy, which has three outfalls, the city is trying to figure out how to upgrade its aging water system as well as manage a combined sewage system, said Greg Fehrenbach, the city’s former business administrator and now a consultant to the city.

While Perth Amboy agrees with the goal of the new permits, meeting the new requirements and paying for the combined sewer overflow fixes, Fehrenbach said, will be a substantial challenge.

“The costs of operations and capital improvements are quite high for a rather poor customer base,” Fehrenbach said. “Rates for water and sewer are among the highest in the region. This added challenge exacerbates an already difficult problem.”

Perth Amboy’s contract engineer will be able to incorporate much of the work needed into its current contract, but the city will be collaborating with the Passaic Valley Sewerage Commission to reduce planning costs further, Fehrenbach said.

New Jersey may be late to the table in requiring communities to develop and implement complex and expensive plans for reducing and eliminating overflows. However, the state stands out as the first to allow its CSO communities the option to do things on their own terms without the federal government dictating solutions, according to Dan Van Abs, an associate research professor at Rutgers University. This means New Jersey communities can use this as an opportunity to transform neighborhoods by using CSO solutions that have multiple benefits.

But while that flexibility is on the table right now, communities that don’t meet the deadlines in their permits could end up with the federal government making the decisions.

The first of two updates on the progress being made toward addressing the problem of sewage overflows in New Jersey cities. It was written by New Jersey Future graduate intern Sarah Watson.